Thessaloniki Tourism Organization is a civil non-profit organization, the city’s official tourism board. The 8 entities that it is composed of are:

Acquiring a new brand name, “Many stories… One heart”, the city of Thessaloniki is proud of the tales it can tell, tales that are combined into a heart, beating loud and constantly for the past 23 centuries.

Having this motto in his mind, TTO’s General Manager Mr. Nikos K. Sapountzis, along with his colleagues, aim to fulfill the organization’s objectives.

The primary objective is to promote the city of Thessaloniki in Greece and mainly abroad, in order to attract as many travelers and businessmen as possible, boosting in parallel the local economy and improving the quality of provided services.

As part of this effort, the Thessaloniki Tourism Organization, with the help and support of local organizations and businesses, organized familiarisation trips, invited and hosted journalists and travel agents from around the world, brought them into contact with the local community, the Thessalonikeans’ way of life, traditions, customs, culture and the city’s long history.

Also, TTO participated in many exhibitions of general and congress tourism all over the world, where the General Manager had meetings with specialist decision makers of tourism organizations, PCO’s, and citizens, presenting Thessaloniki’s beauties and advantages as a travel destination in the best way.

Additionally an excellent level of cooperation with Macedonia airport (SKG) and Thessaloniki Hotels Association has been developed, whilst monitoring arrivals and overnight stays data by nationality and trying to find ways of reaching new target markets, in association with the Municipality of Thessaloniki, Central Macedonia Prefecture, Chamber of Commerce and Industry of Thessaloniki, Helexpo, Thessaloniki Port Authority, Thessaloniki Convention & Visitors Bureau (T.C.V.B) and also with the local Association of Travel Agents, caterers, trade associations and others, achieving, in this way, its strategic objective, the economic and social growth of the entire region.

Moreover, the relationships with the Ministry of Tourism and the Greek National Tourism Organisation (G.N.T.O) offices in Greece and abroad were improved, and a memorandum of agreement between TTO and GNTO was signed.

In three years of operation, Thessaloniki Tourism Organization’s activities were:

3. Brand name presentation to local and press
On Monday 20/02/2012 a meeting with the local press was planned by the organization, in order to present the new Brand Name “Many stories… One heart…” and Friday 09/03/2012 an event was held in TCCI, presenting Thessaloniki’s logo to the city’s authorities aiming at its wide usage.

4. A Memorandum of Agreement was signed by the President of Thessaloniki Tourism Organization (T.T.O.) and the Greek National Tourism Organisation (G.N.T.O) on 26/01/2012.

5. On 2011 an agreement was signed by the President of T.T.O. and Ryanair, for linking Thessaloniki with 4 foreign destinations. The company today flies to 14 destinations abroad & 2 domestic, officially announcing the creation of an aircraft base in Macedonia Airport on spring 2014.

The organization with the support of the Greek National Tourism Organisation (G.N.T.O), priced, programmed, organised and participated in the above exhibitions for free, booking the pavilions, sending printed and electronic material weighing a total of 8 tons, which were given out, indicating its presence by sending 9000 e-mails to TO’s & TA’s . Furthermore around 1500 personal appointments were made during these exhibitions, not only with agents, but also with journalists, local institutions, airlines, public relations agencies, PCO’S etc. The results were assessed and the necessary follow-up made.

We’ve collected and edited the data of TO’s and TA’s and journalists, made contact in the exhibitions in which we’ve participated, as well as collecting the data of tourist agents from the following countries, from local GNTO offices and Greek embassies abroad:

9. Reception, hosting and guided tours of tourism businessmen and press.

Up until today the following articles about Thessaloniki have been published in printed and electronic media in Greece and abroad:

In Greece approximately 100 articles have been published in the following newspapers, blogs and sites referring to our actions with praise:

TTO arranged on 2nd of May 2011 a workshop with 10 German tourism commission members of the German parliament (Bundestag).

17. Welcoming of the first Ryanair flights

TTO received at the Macedonia Airport on April 12 2011, the first ever flights of Ryanair from Frankfurt and Oslo and gave out informational material to the passengers.

18. Meeting with the Turkish Airlines Director in Thessaloniki

On Thursday 30 June 2011 a meeting took place with the Turkish Airlines Director in Thessaloniki Mr. Utku Yasan, discussing Thessaloniki’s promotion through his company and written suggestions were submitted.

On Thursday 19 May 2011, a meeting was arranged by the TTO with all the local authorities, with the participation of 13 mayors of neighboring municipalities, about the tourism promotion of Thessaloniki, and their intention to join the cause of TTO.

20. Creation of a city guide in association with GNTO

Collaboration with GNTO’s journalist, for the creation of a city guide

Seminar attendance with the subject “Sales in the Turkish market”

On Tuesday 19 April 2011, a Marketing plan was filed to the board, by the organization’s General Manager, Mr. Nikos Sapountzis, which was prepared by him, for more essential tourism promotion of Thessaloniki, but also for the better operation of TTO.

26. Audiovisual material collection and copyright license agreement at the same time for the usage of it, by the following Organization:

27. Participation in the press conference of Volotea airlines for the linking of Thessaloniki-Venice 19/03/2012.

28. Participation in the press conference of “Thessaloniki Open House 2012”

30. Speech at the Macedonia and Thrace Hotel Directors’ Association conference, during the international tourism exhibition ‘’Philoxenia 2012”, with the topic “contemporary trends and prospects of tourism industry”.

The results of the above efforts are reflected in the statistical data announced by the Thessaloniki Hotels Association concerning the overnight stay travelers both Greeks and foreigners in the years 2010-2011-2012-2013, and, as presented in the charts below, there is a clear increase in foreign tourism. 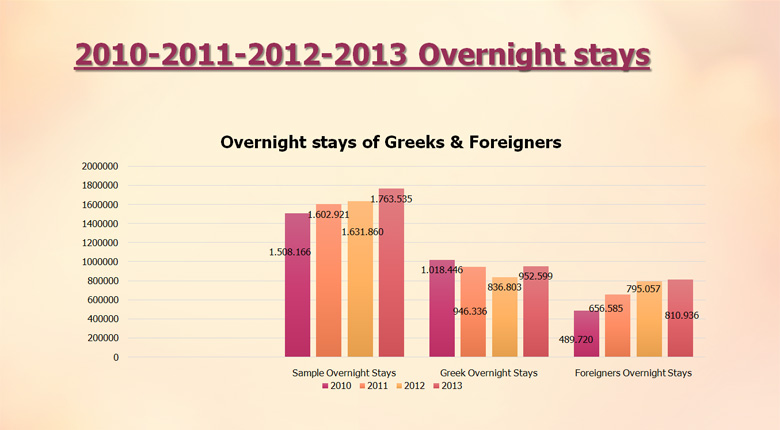